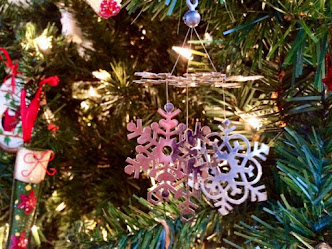 Today's story about a unique Christmas ornament is quite a different story than the Porky Pig ornament in The Door Prize from the previous post in the Christmas on Memory Lane series.

I was my sister’s helper in her Wednesday night class at church which was a group of middle school girls. I loved that Donna asked me to help.  That was in the early 1980’s and I was in my early twenties. She was seven years older than me and I greatly looked up to her and I loved helping her with this class that meant so much to her.

At the class Christmas party I was given a gift from the girls and it was this snowflake ornament - and I am almost certain it was a Hallmark ornament although the box was lost a long, long time ago.

It has been a tradition over the past years to put the snowflake ornament on the tree first before anything else goes on. It is my oldest ornament and it is special to me. A couple Christmases ago my two daughters and a friend picked out a real tree for us, set it up, put on the lights and were getting ready to put on the ornaments. Earlier, I had laid the snowflake ornament on the dining room table and said, “No ornaments go on the tree until after this goes on!”

But, then they sent me to pick up our Papa Murphy’s Pizza and I made the drive, picked it up, came back to the house expecting the tree to be decorated and saw that there was not one ornament on the tree. I was shocked. These are people that love to put ornaments on the Christmas tree! And they hadn’t touched one ornament in all the storage containers.

The snowflake ornament was still where I left it on the dining room table. They thought I wanted to be the one to put it on the tree, so they waited.

I placed my treasure on the tree, watched it sway ever so little and make the soft tingling sound the snowflake chimes make as they move ever so lightly.

Then the rush was on. All the ornaments seemed to fly onto the tree at the hands of eager decorators, as it should be. And when they finished, the delicious pizza came out of the oven and the rush was on to eat their favorite pizza.

The snowflake ornament isn’t the most beautiful or most expensive ornament on the tree. But it is my oldest ornament and now that my sister and her husband have both gone home to be with the Lord, the special memory of this gift from being her helper in the Wednesday night class has become even more precious to me.

Kathy Cheek, author of CLAY and First Breath of Morning. 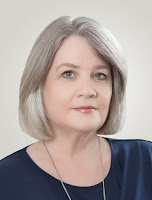 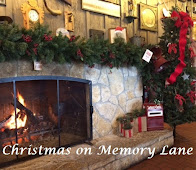 You don't want to miss this heartwarming and nostalgic collection of Christmas stories twice a week through Dec. 23rd.

My devotion Where Is God's Place on Thoughts About God.

Where Is God's Place is an excerpt from my new devotional book CLAY. Click image to read at TABG.

CLAY: Reflections on the Life God Is Shaping in Us - 60 Inspirational Devotions, Stories, & Poetry

First Breath of Morning: Where God Waits for You Every Day - A 90 Day Devotional 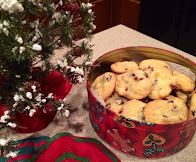